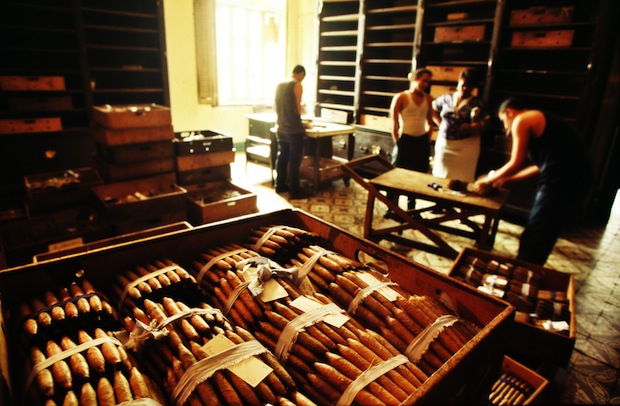 Cuban cigar factory tours are a must if you are travelling to Cuba for a Caribbean getaway. The Cuban cigar is a renowned and coveted souvenir that is made from tobacco leaves and historically rolled by hand. It consists of three parts – a filler, a binder and a wrapper.

The filler is a bunch of tobacco leaves; the binder is a leaf from the top part of the tobacco plant that keeps the filler together and the wrapper is the outermost layer which is a large, tobacco leaf that usually gives the cigar much of its flavour.

It is the Caribbean’s stellar cigar product that has been in production for many years. There is a booming premium cigar market, but the Cuban Cigar has a history that not many modern cigar companies can match. The best way to learn and understand the phenomenon is to partake in at least one of the several available Cuban cigar factory tours.

La Corona Factory is one of the largest cigar factories in Cuba and produces upwards of 30,000 cigars each day. The factory creates cigars for at least twenty-five cigar brands. Located in close proximity to the Cuba’s busiest baseball stadium, the building which houses the factory, was once a cigarette factory.

The factory is organised into sections with each section responsible for a specific yet important task. There is a section that sorts tobacco leaves; another section is responsible for cutting, rolling and pressing tobacco leaves into cigars and the quality control sector which inspects cigars for defects.

The factory tour takes you through each of these sections which are populated with over six hundred workers who fill a variety of roles. Tours last around thirty minutes and you are advised to purchase tickets in advance.

Partagas Cigar Factory is one of Cuba’s best known and most popular factories and produces many popular cigar brands. It was founded in 1845 and makes over five million cigars each year. The historic building which houses the factory, is a brilliant example of stunning Caribbean architecture.

Established in 1875, the Romeo y Julieta factory is popular with cruise ship tourists because of its location in Havana City. It is believed that the owners of the brand were inspired by the Shakespeare tragedy Romeo and Juliet and named what is now a premier cigar brand after it.

This cigar factory is considered as one of the more modern cigar factories in Cuba because it was recently renovated. The factory produces several cigar brands including the H. Upmann (temporarily) and some of the Romeo y Julieta cigars. Visitors are treated to the traditional cigar manufacturing process practised by skilled local artisans.

El Laguito Cigar Factory has a rich history and produces some of the world’s finest cigars. El Laguita was founded in 1967 with a vision to become the birthplace of the first post revolution cigar. The factory is well known for the Cohiba brand which is rumoured to be the best of the best in cigar brands.

This cigar factory is housed in a large mansion in the El Laguito neighbourhood in Havana. The home was built by the Fowler family at the height of a prosperous sugar cane industry and hosted many social functions in its hey day. However, after the passing of the Fowler patriarch, the home was taken over by a real estate company.

After the 1959 revolution and an amazing sequence of events, the mansion became the home of cigar rollers. These cigar rollers were mostly women and they were able to create a quality, highly sought after cigar. That was the beginning of a cigar rolling legacy consisting of cigars that were specially created as gifts for important people.

A tour in the El Laguito Cigar Factory gives visitors a look into the cigar rolling tradition that was handed down from generation to generation. However, visits to the factory are reserved for dignitaries and specially invited guests. If you are lucky enough to secure a tour, savour every moment of it.

There are other Cuban cigar factories tours which can be booked in Cuba. According to the Cuba Tech Travel website, these factories include:

Here are a few tips to note before you schedule any Cuban cigar factory tours anywhere on the island of Cuba:

Up for a round of golf? The Cayman Islands golf scene is heating up the Caribbean.